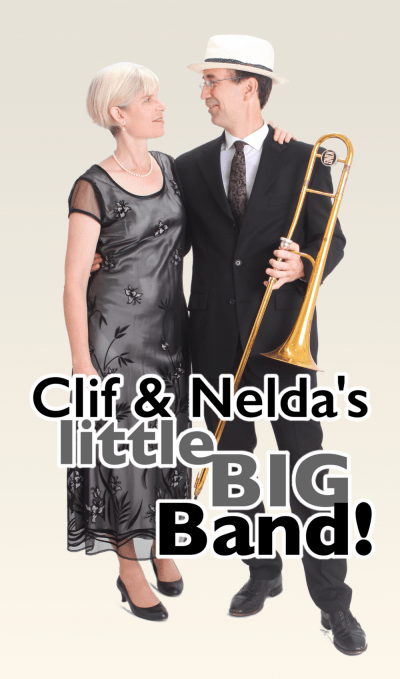 You’ll be tapping your toes when you hear this lively duo with its big, warm sound — featuring Nelda Swiggett on piano and vocals and Clif Swiggett on trombone and percussion. This married couple has played music together since the night they first met in 1987. Their duo together, the little BIG Band, debuted in 2013. They’ve performed at jazz clubs, private parties, weddings, and concert venues around the Northwest, and love to share their joy of music with all audiences.

The little BIG Band plays hundreds of songs, crossing genres including classic jazz and swing standards, lively Brazilian and Afro-Cuban rhythms, and funky hits by Stevie Wonder, Norah Jones and more — all freely interpreted in the moment by this nimble and fine-tuned partnership.

Visit Dates or subscribe below to learn about their live performances.  https://www.facebook.com/ClifAndNelda

“Swiggett has a unique touch… intensely appealing pianism…”
– All About Jazz, CD Review

“…they have developed quite the following!“
– Bob Delf, Northwest Cellars

Tasting Room
“The Little Big Band plays regularly at my winery in Kirkland, and they have developed quite the following! This dynamic duo are very accomplished musicians who play big band, jazz, broadway, latin, salsa, and much more. They are the perfect fit for us, and I highly recommend them.”
– Bob Delf, Northwest Cellars Winery

Holiday Party
“Clif and Nelda were great to work with at our holiday party. Music was great! ​They added a great upbeat mood to the party. Thanks! I hope to see you again next year.”

Wedding Ceremony and Reception
“Thank you for playing at our wedding last Sunday. The guests loved the jazz music played and we were so excited you were able to make our day so special. It was the perfect addition to our ceremony and social hour.”

Adult Birthday Party
“Clif and Nelda are not only talented performers, but they have a great ability to “read the room” and adapt. They played dynamically throughout the night helping pace the evening beautifully. Just about everybody I talked to that night expressed how awesome it was to have such good quality live music. Very highly recommended!”

Corporate Launch Party
“We are so thankful to have had Clif & Nelda perform at our Launch Party​..​. The Jazz was fantastic and really added that special something to our event​ –​ would highly recommend!”

Cinco de Mayo Party
“Our community was very pleased with the entertainment provided by Clif and Nelda’s little BIG band. I would certainly recommend them to others. They ​.​​.. made our Cinco de Mayo party a success.”

Clif & Nelda’s little BIG Band is on the 4Culture Touring Arts Roster, a juried directory of some of King County’s most talented performing artists. King County arts agencies, chambers of commerce, and municipalities can apply for a 50% reimbursement of the little BIG Band performance fee. For more information, visit https://www.4culture.org/touring-arts-roster/for-presenters/.

Jazz & Swing
After You’ve Gone
Ain’t Misbehavin
As Time Goes By
Autumn Leaves
Beautiful Love
Body and Soul
Bye Bye Blackbird
Cantaloupe Island
Cold Duck Time
Cottontail
Darn That Dream
Don’t Get Around Much Anymore
Gee Baby, Ain’t I Good To You
How High The Moon
I Can’t Give You Anything But Love
I Love Paris
I Love You
I’m Old Fashioned
L-O-V-E
Mack the Knife
Make Someone Happy
Mercy, Mercy, Mercy
Mood Indigo
Moonlight in Vermont
My Funny Valentine
The Nearness of You
Poinciana
Road Song
Route 66
Side Winder
Skylark
St James Infirmary
Stompin’ at the Savoy
Take the “A” Train
What is This Thing Called Love
Work Song 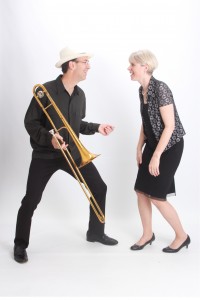 For bookings or more information, contact Clif Swiggett at (206) 484-0296 or cswiggett(at)gmail.com.

Stage requirements are simply a place to plug in and a performance area that is at least 6’ x 8’. The duo typically brings its own sound system, microphones, stands, and electric keyboard (if an acoustic piano is not available). 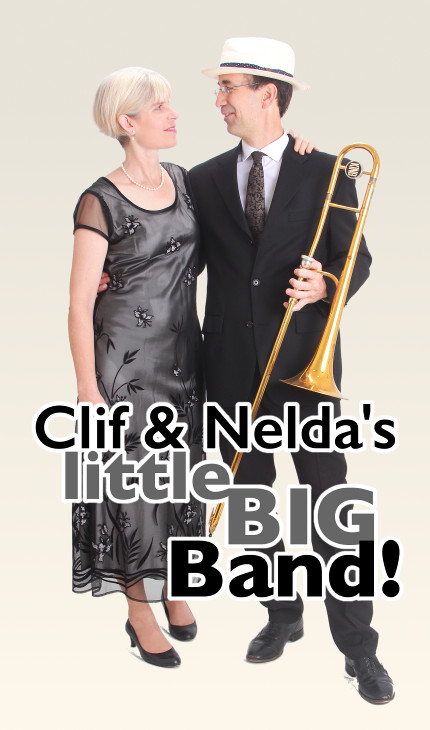